Man City continued their relentless march towards the title with two further victories this afternoon against nearest rivals Spurs and Man. Utd.

A Ryan Deery hat-trick and another from Oisin Collins was enough to see off Spurs who replied through captain Finn Cooper. Dara Deery then weighed in with a brace against Man Utd who pulled one back through Alex Lyle but a Dairmuid Watson goal a few minutes from time secured another 3 points in a 3-1 victory.

After their defeat to leaders Man City, Spurs fell further behind in the chase for the title when they were held to a scoreless draw against Chelsea who had earlier fallen to a 3-2 defeat against Liverpool. A Cathal McKeegen double and a brilliant finish from Adam Peoples proved too much, despite Miceal McBride’s double for Chelsea.

Liverpool then claimed another valuable point in their second match of the day against Arsenal. Cathal McKeegan’s opener for Liverpool was cancelled out by a stunning effort from Cameron Greg Logue.

It was a mixed day for Man. Utd who, despite losing to Man City, claimed three precious points against Arsenal in a 4-1 victory with Liam Weatherall, Conor Martin (2) and Alex Lyle on the scoresheet. Cameron Gregg Logue was again on the scoresheet for Arsenal.

A couple of victories next Friday will secure the title for the light blues of Man. City but it’s still all to play for in the hunt for second place. 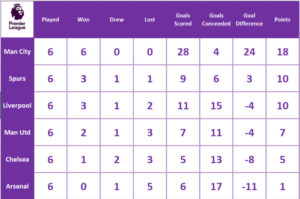