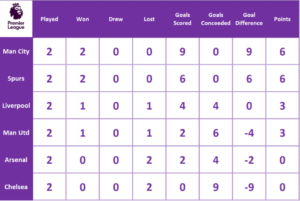 What an afternoon’s football in The Master’s Hall.

Finn Cooper’s Spurs also have six points thanks in part to a double from their captain against Chelsea. Blake Curry’s goal a few minutes from time after Lewis Moran’s penalty save against Arsenal helped maintain their 100% record.

Cameron Gregg Logue’s Arsenal can count themselves very unlucky as they lost both matches by a single goal and Cian McGinnis’ Chelsea will be hoping for a turnaround in form next week when they play Arsenal and Man Utd.

Here’s hoping next week’s entertainment is as good as today’s.